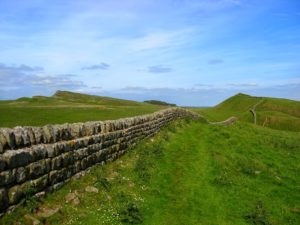 As an historian and archaeologist, I had the chance to visit many ancient sites around the  world, but my favourites were in Britain - the Roman forts and villas. I'd always been fascinated by ancient Roman culture, and while researching for my postgraduate degree in archaeology, I came across a particular site which piqued my interest - Vindobala. It's located in the north-eastern part of England, in Northumbria, and was one of a series of military garrisons built along Hadrian's Wall; a physical reminder that this was the extreme end of the Roman Empire.

The the barbarian tribes on the other side, it was a "Keep Out" sign!

What fascinated me, was that this fort was abandoned in the mid 3rd century, and no one knows why. Or at least, historians haven't as yet discovered the reason.

So, in the light of any other explanation, I decided to create my own, and it had to be something truly terrifying to force battle-hardened Roman soldiers, and their families, to flee the safety of their fort. And I could think of only one thing, some supernatural force their military skill couldn't overcome - a horror known as the "Lamia."

The ancient Romans were very superstitious; they believed in gods and demons, and the Lamia were the closest things to what we call, vampires. They usually took the form of beautiful young maidens who sucked the blood of young men, although they could also take male form.

This then inspired the backdrop to my story - a Roman patrol from the garrison at Vindobala, sent out to rescue a group of Roman captives captured in a barbarian raid, find themselves cursed by a Pictish witch and turned into vampires. They return to the fort, and unable to control their new urges, kill almost everyone there.

The scene then opens eighteen hundred years later, to a young woman - a descendant of the cursed commander - who unknowingly holds the key to ending the centuries-old curse which has plagued her family.

Thus, BloodGifted, Book 1 of The Dantonville Legacy, was born and I was able to combine my love of ancient history and mythology with a modern gothic, romantic tale.

Originally I planned it as a trilogy but here I am writing book 4 -BloodWish - with a spinoff series due for release in late 2019.

I hope you enjoy reading this series as much as I loved writing it.